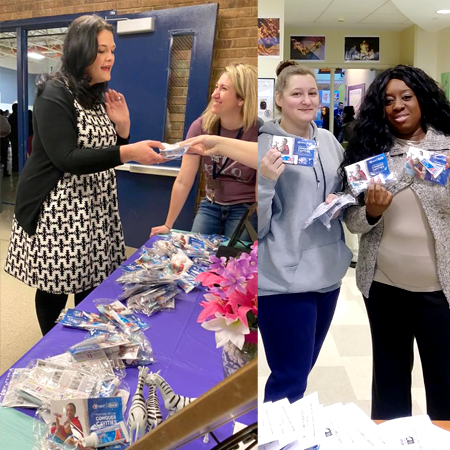 School Family Media developed a custom sampling program and an added value contest to drive product trial, increase purchase intent, and elevate brand awareness of the Crest Kids product line among 300,000 parents at elementary schools. PTO and PTA leaders from 1,200 schools enthusiastically opted in to hand-deliver samples to parents at school family events during the month of February to align with Children’s Dental Health Awareness month.

Participating PTOs and PTAs received 250 Crest Kid’s toothpaste samples and coupons to give away to attending parents.

The “Why I Smile” contest further engaged families that attended, and prompted kids to write or draw about something that makes them smile on a Crest-branded printable. To enter the contest, parents posted a photo of their child’s work on social media using the program hashtag. Winners received a Crest Kid’s Cavity Protection toothpaste, an Oral-B Kids rechargeable electric toothbrush, and The Littlest Tooth Fairy bedtime book. In addition, their school parent groups were given $50 gift cards.

Parent response to the program was overwhelmingly positive: 84% of parents surveyed said they will purchase or are likely to purchase the Crest Kids product line for their children, and 69% said they would recommend the products to colleagues, friends, or family members.

Positive brand perception of Crest Kids increased significantly among parents and influential PTO and PTA leaders at participating schools, too. Before the sampling program, 90% felt very positive or positive about the Crest Kids brand. That figure rose to 97% after the program.

purchased or likely to purchase

feel very positive or positive about the brand

“They were excited to have ‘just my size’ toothpastes! The kids thought it was great and the parents of course were very appreciative for both the sample and the coupons. Quite a few said they were going to buy new toothbrushes and let their child be part of it! Thank you so much!”

Kids enjoyed their free toothpaste at our CATCH Healthfair and STEM night! #thanksptotoday and #crestkids pic.twitter.com/L4pUzVxsOa

Want to chat about your brand or company goals? Drop us a note.